You may have heard stories about our amazing friend, a Syrian-Greek artist we met in Lesvos. His name is Kastro, and he provided care and shelter for refugees at his home in Lesvos. He welcomed those with special needs that surpassed what the refugee camps can accommodate. Kastro took care of them himself and shared his life, his home, and his spirit.

Hundreds of refugees are stuck in Greece, clueless as to what will happen next. With nowhere to go and very little resources at their disposal, their needs have shifted to the mainland of Greece. A man of action, Kastro moved his initiative there, and immediately went to work. He took over an abandoned school, and outfitted it to host over 200 refugees (mostly families, children and handicapped individuals). He bought and collected tents, mattresses, and food, and with the help of other volunteers, he installed showers, built a small kitchen, and erected a rock climbing wall for children. He bought a car to transport children to and from school. He worked tirelessly on repairing the broken sewers, a highly ambitious and tough project to tackle. He held community meetings at the school to spread the awareness, and educate local residents about the refugee crisis.

It’s difficult to put into words how dedicated Kastro is. He has a huge heart. We at SURF are proud to know him, and proud to be able to support him and his initiative. We are humbled by his generosity and we are lucky to know this man.

Your ongoing support and the generosity of your donations will continue to support people like Kastro who has been instrumental in bettering the lives of refugees. 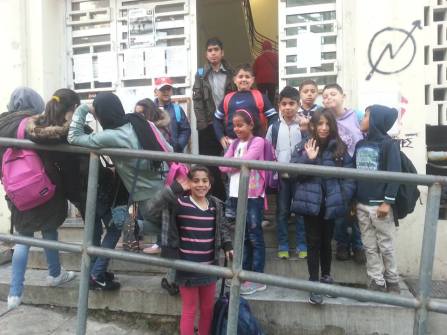 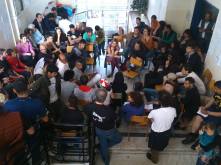 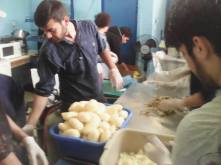 It’s true.  The situation in the European Union has changed drastically since our SURF team was there in February.  Weather, politics, and refugee arrivals create an unpredictable and ever shifting situation.

This Spring saw the start of the EU-Turkey Refugee Agreement, which allows for the deportation back to Turkey of all “irregular immigrants” and has been highly criticized by human rights groups.  Go here for a full explanation of the deal.

This turned Moria (the government registration camp on Lesvos) into a detention center rather than an open camp, which led to the April closing of Better Days for Moria (the camp where we primarily volunteered).

In February, the Balkan States (part of the widely used passage from Greece to welcoming countries such as Germany) suddenly capped how many refugees would be allowed to cross into Macedonia from Greece, and in March stopped allowing passage all together.  There is currently estimated to be 12,000 people stuck in the Greek border town of Idomeni (May, 2016), and many more thousands stuck elsewhere in Greece.  In the last 10 days another group of European countries, including Austria (formerly a predictable safe haven), imposed refugee caps, creating an impending ever growing backlog in Greece.  Even when a country can agree to asylum procedures lack of resources for processing applications and for the relocation services continues to create a bottleneck.

This is being called the worst refugee crisis since WWII.  All we can do is continue to see the refugees as individuals and families and provide them with some human needs and comforts to the best of our ability.

SURF does still have allies who have moved their operations from Lesvos to the main land in Greece and we’re in regular contact with them around what is most needed.  Please continue to support SURF with your donations and know that every dollar does help and will be donated directly to the support of refugees.