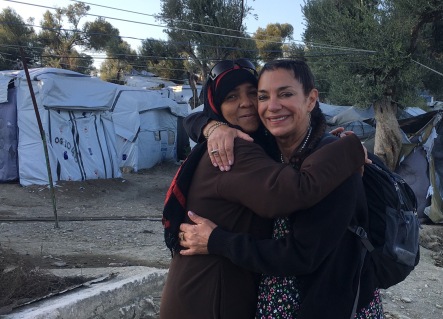 I have recently returned from spending 7 weeks working with refugees on Lesvos Island in Greece.  Because of its proximity to Turkey, Lesvos receives more refugees than any other island in Greece, (over 9,000 at last count in Moria camp alone), with boats arriving daily.  People flee the war, torture and horrors they have experienced at home to stay alive.  Most I spoke with do not care where they end up, as long as they can “live” safely and in no daily fear of death.

They come from Afghanistan, Syria, Somalia, Sudan, Cameroon, Ethiopia, Congo, Iran, Iraq, Pakistan, and many other countries.  Or they are Kurds fleeing from a long life of persecution, still experienced in the refugee camps by their fellow refugees.

Most seem to be from Muslim majority countries where they have experienced persecution by Daesh, the Taliban, Isis, Boko Haram, Al Shabaab.  A 14 year old Kurdish girl blinded in both eyes by the Turkish Army, a 15 year old Somali girl, whose right arm was cut off at her shoulder because she was not completely covering her face, a 27 year old Cameroon man whose toenails had been pulled out, a 15 year old Egyptian boy who was arrested and severely beaten in prison after trying to defend his brother.  So many horrific stories.

They come alone or with family, if they still have family.  Many have literally lost family members by death or during their escape from their countries.  One 14-year-old boy from Afghanistan couldn’t get over that “he had lost his younger brother” during their long journey toward freedom.  He cried and cried in despair, worried that his brother was dead or abducted in to slavery.

The school I worked at was for unaccompanied minors, as young as 11 years old.  Many had lost one or both parents, had no one, and nothing but the clothes on their back. I taught English, a language most of the children believe will help them in their futures, wherever they end up, and watched minors from varying countries move toward survival, crossing their cultural/language barriers and connecting as children, often laughing and playing.  Still many are distraught at their past trauma (years of war, watching loved ones killed, being personally tortured) and with their present living conditions at the horrific Moria camp.  Cutting and self-inflicted harm is common, and there are many suicide attempts in the camp from minors as young as 11 years old.

I worked with beautiful and caring people…the teachers and staff at Gekko Kids (Magda, Mersini, Eirini, Elena, Maro, Daniel, Georges, Saam…a refugee who worked as a volunteer and touched me with his beautiful heart and compassion). I also met with many other people on Lesvos, doing incredible humanitarian work…especially Nikos and Katerina, an amazingly beautiful Greek couple who have given their lives to helping and providing for (clothes, food, etc.) refugees daily.

I’ve returned home…it’s important for me to work on America’s current election in hopes of gaining back the Congress and reversing some of the damage of Trump.  But, in the mean time, I find that most of my criteria concerning life is questioned.  Faces I have seen even in passing during my stay in Lesvos, the many refugees I have met (Warios, Reza, Cedric, Ibrahim, Masooma, Iqra, Ruhullah), pay me visits unexpectedly, interrupting my everyday routine, and especially my sleep in dreams. I carry them around everywhere, and yet, I feel that I cannot make the slightest guess for their future. Has God any plan for their next move? Probably, He hasn’t made up His mind what will become of them whatsoever….

I want to thank all of you who offered your support toward making my trip possible…I couldn’t have done it without you.  Know that every penny donated, went toward the refugees as well as a few thousand more of my own.  It was well spent…shoes for refugees, food, bus tickets so refugees could come to town to their doctor’s appts, help with cell phone repairs…their lifeline to their families, their past and future…funding for medical and legal help, clothing, phone calls to family members back home, etc.